Two days from ending our month in Colombia, we can readily say we feel safe here, particularly in the countryside but also in the cities, even the one car-bombed only a few days ago.

And the odds of safety are in our favor.

There may be an average of 500 reported muggings a year in Bogota, where we are ending our visit, but that’s in a city of 8 million residents and innumerable visitors. The risk factor is doubtless even lower in the more middle-class neighborhood where we are staying. If odds like that are high, we need to start buying lottery tickets.

Still, feelings and odds never tell the whole story. An hour after we wandered through a popular Medellin park ogling the still-blazing Christmas lights on an early January night, we received an urgent message from our Medellin AirBnB host telling us to avoid that very park because of recent attacks on tourists, some lethal. Ignorant bliss can end badly anywhere, and it is natural to be ignorant in new locations.

But we needed to know more if we were to make realistic adjustments. Let’s be honest: a lot of Europeans and other foreigners consider the USA dangerous because of its world-beating gun violence. Does that mean it is unsafe to walk around on most American streets? Not by a stretch. We needed a similar reality check in Colombia. For it, we checked multiple sources: our solicitous AirBnB hosts, the faculty of the Spanish language school where we spent two weeks packing our linguistic bags for South America, tour guides, journalistic travel blogs like Along Dusty Roads, even friendly Uber drivers, who serve as de facto national ambassadors. 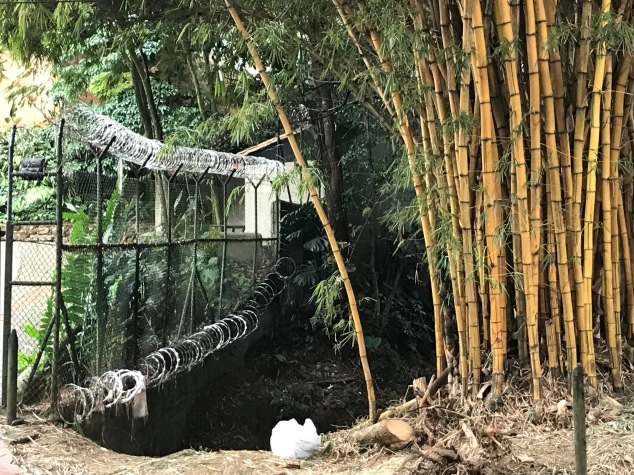 Medellin is a city of barbed wire and bamboo. We never found out what the combination indicates

What kinds of attacks on tourists and were some more vulnerable than others? And those pairs of policemen we kept seeing on every street corner … were they necessary to ensure public safety, deployed just to make people feel safe, or possibly even a public employment program? What exactly was the danger on forbidden streets … being pick-pocketed or knived? It makes a difference

Medellin in particular felt more than anywhere else like Manhattan in the ‘70s or ‘80s, when you could stroll blissfully down Fifth or Madison avenues or the Upper East Side without looking over your shoulder, but you beat it out of Penn Station as fast as you could and didn’t venture into Time Square after dark. Was the Big Apple dangerous then? Sure, if you were careless or in the wrong place at the wrong time or just plain unlucky, like in any big city, anywhere. Did we go anyway? Of course!

At the end of the day, we decided to apply the same rules in Colombia.

About Those Tourist Attacks

We often see this beautiful flower in semi-tropical locations we visit.

Google’s English translation of “escopolamina” was “escopolamina” so we were not even sure what the risk was until we met up with our first tour guide a couple days later. Sebastian explained that escopolamina – aka, “Colombia’s devil’s breath” – is a drug that locals cook up (literally, like cocaine) from the beautiful but potentially deadly belladonna plant. Criminals then blow, sprinkle or otherwise deliver the drug on a victim’s nervous system, where it can induce a state of high suggestibility (“Yes, of course, I would love to take you to an ATM machine and empty my bank account for you“), stupor or coma, vastly reducing the chance of victims resisting to robbery or kidnapping. Occasionally, a victim dies, including a Vancouver, BC, professor last month.

The guide told us that he never, ever under any circumstances or temptation takes anything from the hand of a stranger on the street because sprinkling the drug on paper before handing it off to passersby is one of the tactics used by criminals to render victims sufficiently incoherent to rob them or worse. We immediately embraced his rule but at the same time felt reassured by knowing who was most often targeted: Single men beguiled by attractive young women. This would not be us.

A week after Louis captured this carefree shot of Comuna 13, the slum had become “hot”

Then there was the narco issue. Colombia today exports four times as much cocaine as it did when Pablo Escobar was alive, we learned along with Spanish at our Medellin school. In a country where a potato farmer earns about 79 cents a day and a small-time narco earns $32, the economic incentive to help satisfy the appetites of eager US users (the primary market for cocaine) by dealing drugs is strong.

What has changed since the days of the big Colombian cartels is that the cocaine industry has broken down into neighborhood gangs, each with its own sources, distribution systems and boundaries. In Comuna 13, the colorful slum we ambled so peacefully our second day in Medellin, this can produce spontaneous and bloody warfare. A fellow student who visited the district one week after we did found the streets full of soldiers with automatic weapons, a sight we had not seen at all. At school, a teacher explained this was in response to an outbreak of gang violence in the days since we were there. “When you see headlines that say, ‘Comuna 13 Esta Caliente’ (‘Comuna 13 Is Hot”), don’t go, or go only in an organized group.” Not a bad rule for any hot spot.

And then there was the recent car bomb at a police academy in Bogota. What we find tragic and remarkable about the attack by the right-wing ELN is not only the magnitude of the attack – 21 dead, dozens injured – but how common political terrorism is becoming again in Colombia. The ELN has carried out 33 attacks and one kidnappings in Colombia … just since President Ivan Duque was inaugurated last August. That explained why our rental car was sniffed out by an explosives dog before we were allowed to park it at the airport but, in the case of this form of instability, tourists are not the target.

Public relations aside, it is clear to us after almost a month in the country that Colombia’s history of violence is not entirely a thing of the past. Its narrative is perhaps more accurately labeled “Violence to Transition” than “Violence to Transformation.”

How does this affect us or any traveler personally?

After a policeman stopped Louis on the street in Bogota this weekend to tell him it was dangerous to carry his camera slung over his shoulder, we raised our risk antennae a little higher, being more vigilant about sticking to our big-city rules and following the examples and warnings of locals we meet. When a 3.7 earthquake hit on our first morning in the city and sent our seventh-floor apartment swaying, we were reminded that random chance is always with us.

But stay away from this stunningly beautiful, welcoming, striving country in the midst of an epic revival? Not in a New York minute, even one from the ‘70s.

FROM THE PARTOUT TOOLBOX:

Traveling for as long and far as we do, we fly a lot of budget airlines, which means we are always running up against carry-on and/or checked baggage restrictions that are often much lower outside the US than inside.

One of the tricks we have learned to get around the baggage cops is to keep a grocery bag on hand at all times to repurpose as a stealth carry-on. Most airlines, even the most ferocious about baggage, let passengers toting disposable food bags sashay on board without a quibble. We routinely sneak some of our heavier carry-on items (travel guides, iPads, umbrellas) onto airplanes through this loophole by tucking them at the bottom of these “disposable” bags, topping them off with a yummy little bag of potato chips and maybe a newspaper and waltzing aboard. The tactic has yet to fail and is a lifesaver when we can’t fit all our carry-on into our allowed carry-on or we are on the hairy edge of exceeding weight restrictions.

TOP TIP: Always carry a Trader Joe or similar lightweight, collapsible, reusable bag on long trips. Even if you have more packing self-discipline luggage than we do, they come in handy if you go grocery shopping, need an instant laundry bag or just miss a familiar sight from home.

Coming soon: Do Not Read While Hungry