The Lonely Planet guide to Colombia says the country has always been synonymous with violence, its history a litany of wars and bloodshed. In 1991, Medellin achieved the further distinction of being named the most violent city on earth with a homicide rate that reached 380 deaths per 100,000 people. For perspective, that’s almost seven times the rate in Baltimore, currently the most murderous city in the United States.

The most common reaction we got from telling people in the States we were headed to Colombia was, “Isn’t that dangerous?” The answer is complicated, like questions about traveler safety always are. We take it up in two blogs, starting today.

The Case for Hope

Upbeat messages like this one celebrating hope bloom all over the city, even in the slums.

Since the death of narco-terrorist Pablo Escobar in 1993 and the end of the Medellin-Cali drug war in 1995, blood-letting in Colombia has plunged. By the time the FARQ reached a peace settlement with the government in 2016, the murder rate in Medellin had dropped to less than half that of Baltimore. In a handful of years, the city was named the “most” or “best” on any number of worldwide lists. A Washington Post travel story in 2016 raved that “Medellin is a city worthy of five-star bucket lists.” The New York Times this month named Colombia the #2 place to visit in the world.

Reactions to Louis’s lens at the Metro at rush hour. Mostly friendly!

On our second day in Medellin, we checked out the narrative on the ground by taking a half-day tour called “Violence to Transformation.” The evidence of transformation is, indeed, impressive.  “We are having no more fear,” our architect/urban planner tour guide Sebastian told us on the tour. “Now we are recognized for innovation.”

There is our upscale Provenza neighborhood of El Poblado, an extravagantly lush urban jungle bulging with boutique hotels, craft cocktail bars and foodie restaurants that could compete with the best in any city. Louis’s take: “La Jolla on steroids.”

There is Botero Plaza, populated by 23 bronze statues donated by the world-famous sculptor Fernando Botero to uplift his home town. “Standing outside in this square would have been impossible,” Sebastian told us as our group walked the plaza. “People were afraid.” Now whole families (and the random tourist) pose with, on, under and beside the sculptures, rubbing selected body parts to a high gleam for good luck. 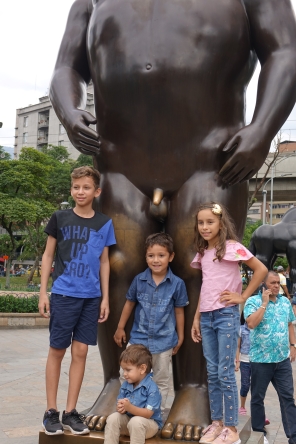 There are enormous, wildly decorated malls. The Santafe mall with the skating rink in the center reportedly has 460 stores. Viva, in Escobar’s trendy next-door hometown of Envigado, is topped with an amusement park called “Happy City.” 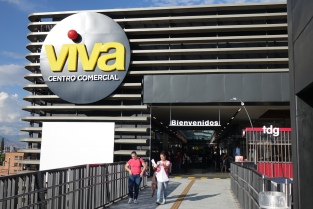 There is the Metro system, carrying an estimated 1 million riders daily on trains, trams, buses and boasting the only gondola commuter service in the world. A Metro ride costs about 88 cents if you don’t qualify for a discount and, with transfers, sweeps you from the flat city center to the top of the Medellin world on one ticket. “This Is Quality of Life”

Medellin sits in a long and narrow valley divided into 16 districts strewn along the valley floor and up the towering mountainsides. The displaced, refugee and poorest live in houses patched together plastic, wood and scrap metal on heights beyond the reach of paved streets. If you squint, you can see a man grading his building site with a shovel in the picture below so he can erect a house like the ones in the next photo.. 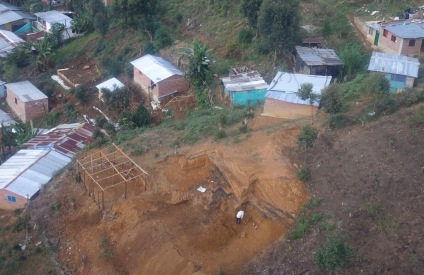 Of the numbered districts in Medellin, Comuna 13 is the most notorious, home to 40 competing narco gangs with invisible boundaries it can be deadly to cross.

Sebastian told us the federal government launched 50 separate military operations in the 1990s and early 2000s “to “recover” Comuna 13 from narcos and dirty cops. All failed. Residents lived in relentless fear for their own lives and their children. “There were a lot of hurted and murdered people,” he said. “The hospitals were full.” Because Colombia bans criminal prosecution of minors and children thus cannot be put in prison, drug traffickers routinely recruited and armed children as young as 8 years old to execute their killings.

The most devastating military operation was Orion in 2002, which brought 41 hours of continuous gunfire to the neighborhood and left 50 people dead, without changing anything. After that, the guide said, the government learned “the way to fight violence was not with more violence but with help for the people” – public works and public services. A school was built. Outdoor gyms were installed.

Locals take their own portable equipment to the open-air gyms

A series of six escalators was installed to whisk people in Comuna 13 more than 1,000 feet uphill in six minutes and save them a 28-story hike to the highest reaches of the slum. “This is quality of life,” Sebastian said. “They gave people hope.” Businesses sprung up at the escalator landings. Residents prospered. Sebastian took us to an ice cream store near the escalators for paletas, ice cream on a stick like we have never tasted it. “Before the escalators, this store used to sell 50 paletas a week. Now it sells 600 to 700 a day.”

Emblematic of the district’s renewal are its murals, many of which promote messages of unity and civil resistance to violence. Sebastian told us the elephant holding a white flag of peace in his trunk is there to teach the younger generations never to repeat the past. 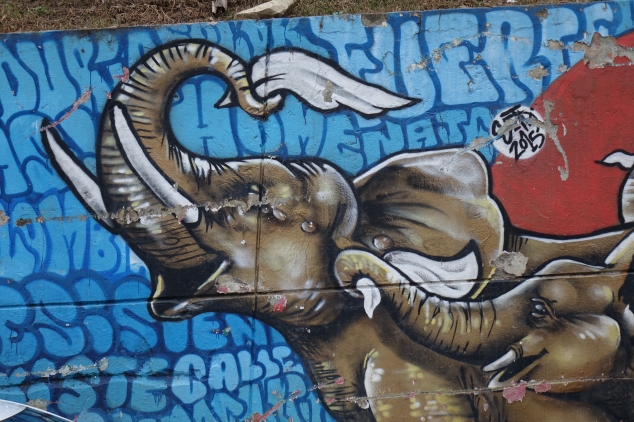 Medellin and Colombia have been transformed enough that tourism is booming and talking about “the dark age” to outsiders has become controversial. Locals who work with visitors are particularly discouraged from talking about the past. Disapproval like this sentiment voiced in a TripAdvisor forum – Colombians in whole are very welcoming, warm and hospitable. They truly want visitors to enjoy their country without harping on Colombia’s criminal reputation – is common.

But do the upbeat publicity and bright colors mean Medellin and Colombia are safe? Three days after a terrorist car bomber killed 21 people and injured scores more in Bogota, most of them young police cadets, the question is back on the public’s lips. What does that mean for us as travelers?

From the Partout Toolbox: One day after Partout blogged about the travel benefits of our Sapphire Reserve credit cards, the Wall Street Journal published a front-page article about big banks cutting back on high-reward credit cards. Some benefits have already been trimmed and others could come under the knife. If you have a WSJ subscription, “Rewards Credit Cards Gained a Fanatic Following – Now Banks Are Pulling Bank” ran January 1. Even if you can’t circumnavigate the Journal’s virtually impenetrable firewall, the bottom line is in the headline.

TOP TIP: If you travel a lot, a credit card with travel perks like trip cancellation or interruption insurance, medical evacuation coverage and other bennies is a no-brainer. Even if you don’t yet travel a lot but want to, sign-up bonuses that give you enough miles to go to Europe essentially free can make a year with a new card worthwhile. If the banks are backing off, getting one of the perk-heavy cards while the big sign-up bonuses last makes sense.

COMING NEXT: Are We Safe?

7 thoughts on “Medellin: Violence to Transformation”