Roaming the southern Serengeti for a week, groping for words to even faintly capture what we saw, your Partout duo kept defaulting to movies.

What left us all but speechless was both the landscape itself and the profusion and diversity of life on it. More than the magnificence of the alpha male lion, the immensity of the bull elephant or the elegance of the grazing giraffe, there was simply a dizzying abundance of life and close-ups of the circles of life we had not expected.

We saw johnnies of giraffes (always all females except for one lucky male).

Wildebeest on the move

Sometimes, in a single scene, we watched hyena slink, jackals trot, Cape buffalo lumber, ostrich peck. We observed lionesses observe hyena in the distance (pondering whether to go rid themselves of predatory competition), while the hyenas scanned the plain for their next meal or menace.

Meanwhile, always, above the plain, vultures observed the dying and dead, waiting for their turn. 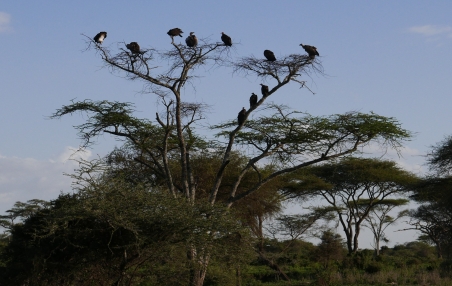 An estimated two million wildebeest occupy the southern end of the Serengeti plain during the migration of December to March to give birth, nurse their young and, perchance, to die. One million zebra and assorted hundreds of thousands of other grazing animals join them. Locals and guides refer to the mass of animals simply as “the migration.”

“Let’s drive into the migration this morning to see what we see,” our guide would say.

What we would see was animals as far as the eye could reach.

Ridge lines that looked from a distance like forests until they started undulating. Columns of trudging ungulates that stretched to the vanishing point. These were scenes from paradisal Eden or maybe from the American West before the white man.

But this was no romantic Jean Jacques Rousseau painting, no lion lying down with the lamb. For we urbanites atop a food chain that consists primarily of Costco, Trader Joe’s and Safeway, this was a dramatic and sometimes bloody demonstration of the interdependency of countless species that survive by feeding upon one another in a complex hierarchical scheme that starts between species and continues within families of single species.

At the zebra kill where we watched the alpha male gorge, one of the lionesses who brought home the meal (it’s nearly always the ladies who bring home the bacon) had the temerity to try to sneak a nibble. The lion roared and lunged at her, all teeth and claws, prompting her to instantly roll onto her back with her soft, vulnerable belly exposed in a show of abject subservience.

Only after the male sauntered away with sagging belly did she and a fellow female dare take their share of what they had brought home.

When animals have fed recently and well, their stomachs clearly bulge and sometimes nearly touch the ground.

Female wildebeest have a remarkable survival knack that allows them to extend their pregnancies up to two weeks if the conditions for birthing – rains not fallen, grass too sparse – are not quite right. (Giraffe can do the same for up to a month or more.) On Wednesday of our week on the plain, we had driven miles through the migration with nary a calf to be seen. Cows everywhere were swollen with full-term young, but no newborns. That night, there were rains. The day after was overcast and cooler.

On Friday morning before dawn, we set out on a childbirth search. Not far into the drive, we spotted two vultures and a crane in a three-way tug of war over something that flashed bright in the early morning sunlight. They withdrew when we drove up, leaving behind the bright red placenta they had been fighting over. The calving had begun.

Soon, we were spotting golden flashes in the herd – the light, camouflage coats of infant wildebeest. First a single one here and there, then two or three among the long dark legs of moving adults. Birthing seemed to be contagious. Once one or two mothers in a herd of cows gave birth, others followed suit.

Young are born feet first and start walking immediately. We didn’t luck into a live birth but saw several minutes-old babies slick from the womb staggering after mothers who still trailed umbilical cords or afterbirth from their birth canals. There is no hanging around the maternity ward on the savanna; birthing mothers and their babies are both highly vulnerable, and many don’t make it.

At the scene of one childbirth fatality, the hind legs of the calf protruded from the dead mother’s carcass. Vultures thrust their heads up the birth canal to feed on the unborn young. Among vultures as among lions, there was a pecking order. That’s a dominant male below spreading his wings as he flew in and moved to the front of the ranks.

Breaking rank provokes aggression against interlopers (as below). Meanwhile, predators unequipped to compete with the vultures wait their turn at the edge of the scrum, pulling rank within their own species. The stork at the upper right inflated his red air sac to signal superiority to the stork  on the left.

Cats cull the herds, large scavengers feed on the leavings of the cats and other big predators, small scavengers feed on leftovers from larger ones, insects pick the bones clean, birds and bats gorge on the insects. Nothing goes to waste – not a placenta, not a carcass, not a morsel of edible meat. When these are all consumed, hyenas eat the bones. Then porcupines and hedgehogs eat the hyena dung, white and rich in calcium. 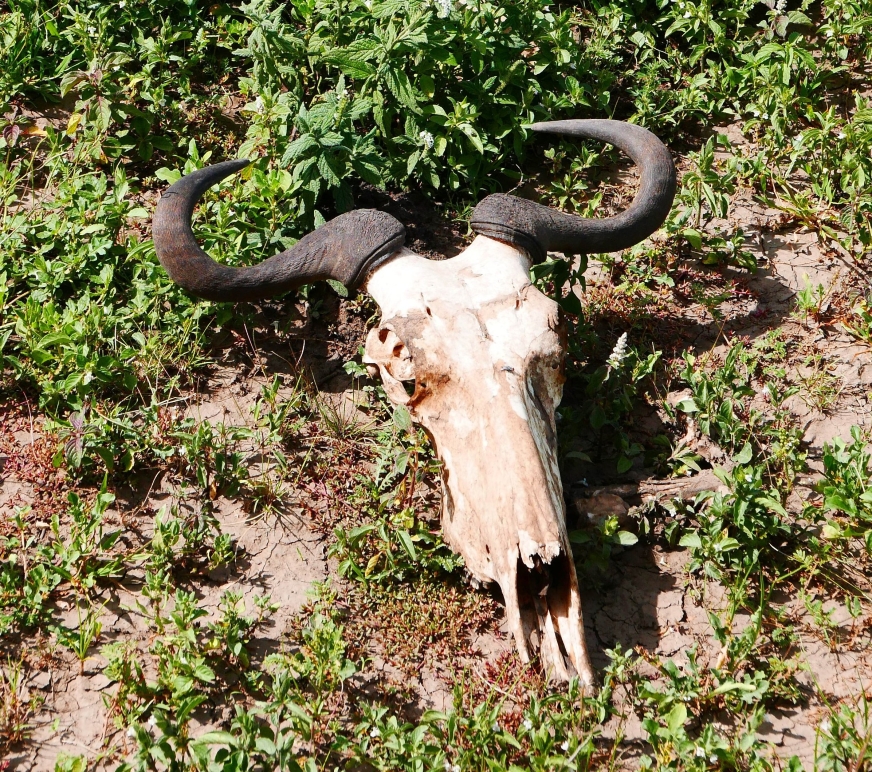 Eventually, all that’s left is the skull or maybe a rib cage, testimony not only to death on the plain but to life.

Coming Soon: Tanzania from the air