This Partout comes to you from one of Doris’s “never” cities. As in “I will NEVER go THERE!”

The mere fact that we are sending this from Mexico City, where we will spend most of this week, is a perfect illustration of the problem with applying never to any travel destination.

Times change. We change. Places change. Our willingness to defer to each other’s travel wishes and whinings changes. Yesterday’s never becomes tomorrow’s must-see. And it’s not just us. We have dear friends whose travel rule has always been never go to the same place twice (you know who you are). At last count, they have been to Uganda three times in the last decade and have not discounted another visit.

With a big slice of humble pie, then, we submit this confession to our most recent never-land travels . 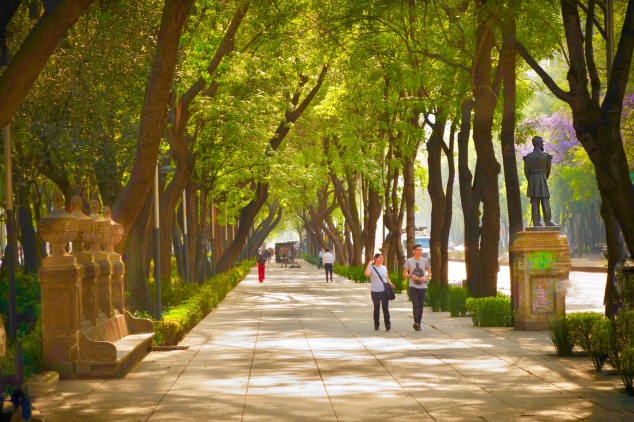 This is our second trip to Mexico City in a year, a doubly humbling example of the pitfalls of consigning destinations to never-land.

Doris lived in Mexico in the early 1970s. While there, she suffered recurring bouts of intestinal distress, found living under Napoleonic “guilty until proven innocent” law to be nerve-wracking and was appalled by the dire poverty and human degradation that were routine in the big city of Guadalajara. For years, her line about traveling anywhere outside the developed world was, “I don’t consider poverty to be a vacation.” There are those among you who heard those very words.

What happened? Doris became less averse to personally witnessing human distress. She came to see that dollars she spends in undeveloped countries sometimes provide an infinitesimal degree of improvement in the welfare of struggling people and to believe that knowing more about the world outside the privileged Western bubble is instructive. At the same time, Mexico City was transforming itself from a bedlam of smog, crime and food that made her sick into a vibrant, modern metropolis people visit just for the dining pleasure.

Bottom line: We don’t expect this week in Mexico City to be our last. 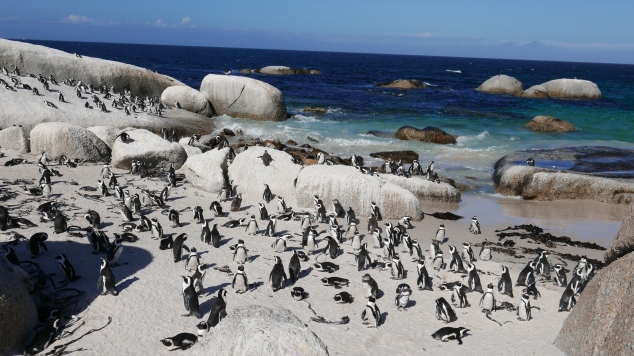 Doris’s objections to this particular destination were parts logistics (it is a loooong way from anywhere she has ever lived) and part ideological (disgust with the country’s long-standing apartheid and apartheid’s successor pattern of segregation).

What happened? We were already in Africa, visa problems had crushed our plan to head to Europe from there, and Louis had always wanted to see Cape Town. Needing to park ourselves somewhere, anywhere, outside the EU for three weeks and being only a five-hour flight from South Africa, off we went.

There is a helpful corollary to never-say-never: when you have low or no expectations, it is hard to be disappointed. Expecting little, Doris found Cape Town a constant surprise – its racial history a subject for study and discussion with locals, its landscape breathtaking, its weather sublime. For the two of us as former newsies, landing the day after the nation’s president was ousted and in the midst of an epic water shortage was icing on the cake.

Bottom line: The logistics of visiting South Africa are still daunting, but we would never say never to going back. 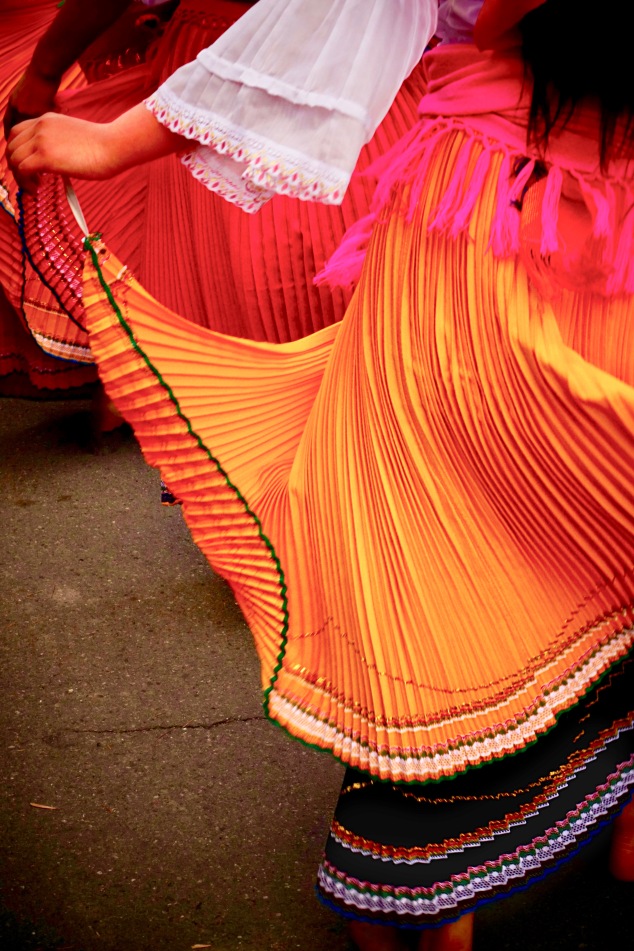 Seen on the streets of Ecuador

Having now spent nearly five of the last 14 months in South America, this is not just a slice; it’s a whole  humble pie.

Again, dubious Doris was the one who long foreswore South America, albeit with exemptions for the Galapagos (a lifelong dream destination) and Inca Peru. Having lived in former Spanish colonies (Southern California and Mexico) more than half her life, she feared the whole region would feel same old/same old; her standing line was been there/done that!

What happened? In Partout’s perennial quest to keep Louis warm in winter, South America was simply too obvious a choice to ignore forever, plus Colombia was one of the few countries on earth Louis had never visited. Thus, off we went, first in January 2019 for more than two months and then again in December 2019 until Leap Day 2020.

The “again” is the tipoff to how Doris found South America – at least Ecuador, Colombia and Peru, where we have spent all our time. Geographically dramatic, culturally fascinating, full of welcoming people, cheap (cheap is good when you travel for four or five months at a time), South America has proven pleasantly familiar without being same old/same old.

Bottom line: South America is now so far from never-land for Partout that we are considering a unique tour of Bolivia and the wine country of Argentina in 2021.

Never Machu Picchu and Prague (and Meh to the Galapagos) 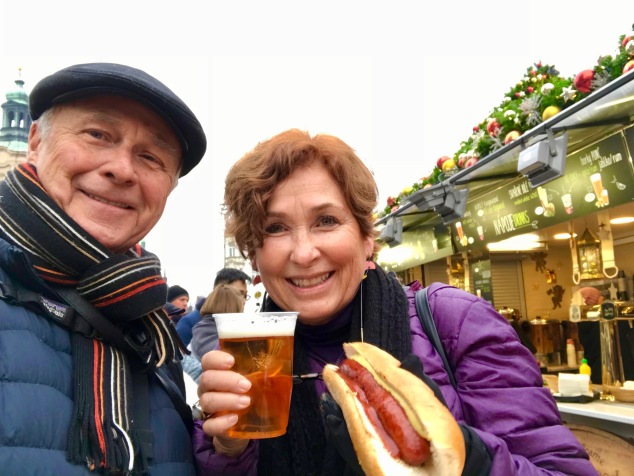 Louis was never as adamant in his nevers as Doris, but he has been to more than 130 countries, mostly on the job as a network cameraman. Talk about been-there/done-that. In the case of Machu Picchu (where he had filmed in the rain) and Prague (where Doris wanted to go in the dead of winter for the Christmas market), his reaction was magnified by weather dread. At the same time, Doris’s dream Galapagos was not exactly never-land for him, but he long regarded the islands as overhyped and overpriced. Though he rarely says never to anything involving an airplane, Louis’s shoe-tips were pretty thin from his foot-dragging over all three of these locations.

What happened? Doris put together a Peru itinerary dominated by places her travel mate had never visited and a Prague visit that was short and included a house exchange living in a neighborhood, which presents its own novelties. Both destinations turned out to be like nothing Louis had experienced while visiting them on the job (duh?). Meanwhile, the corollary of never say never kicked in for the Galapagos: with low expectations, the trip proved so full of discovery that Louis is now firmly of the opinion the archipelago is one of the few must-sees on earth.

Bottom line: Seeing any place through a viewfinder with one eye is no substitute for visiting in living color with both eyes wide open.

There remain destinations and experiences that are not on Partout’s horizon, not for ideological or idiosyncratic reasons or pure bull-headedness but because, no matter how long we remain fit and road-worthy, we only have so many trips left in us. It makes sense to be discriminating, and some places just plain appeal to us more than others. We are also learning more about our appetites for marathon travel, and that is bringing some new nevers to our lips.

We’re not confessing what they are, though. We have eaten far too much humble pie already to admit to a never that, without warning, could become a must-do. 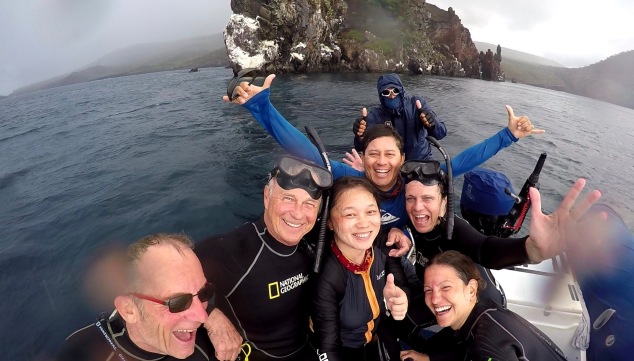 Is that guy with the mask on his forehead happy he cruised the Galapagos? You betcha.

Tips from the Partout toolbox: We try to avoid killing trees with our printer, but we have taken to printing out and packing complete flight purchase details when we are going to be traveling on foreign airlines. Frustratingly often, we find that, when we start to check in with them online, we are asked to pay for upgrades (e.g., checked baggage, extra legroom, priority boarding, seat assignments) that we pre-paid with the ticket. It almost seems airline websites are deliberately wired to double-sell upgrades. Because we are often holding so many tickets we can’t remember what each and every one includes, we have decided it is best to carry the proof of our purchases in hand to present at check-in counters when online check-in does not recognize what we already bought.