Sometimes our plans pop, sometimes they fizzle. Our New Year’s eve was a little of both.

One of the reasons Partout ended up in Cuenca over New Year’s eve was Doris’s seduction by accounts of the city’s spectacularly fiery and colorful celebration.

At least as old as the Spanish invasion, the festivities famously star human, animal and fantasy effigies called monigotes that are built by families and neighborhoods, carried into the streets more or less on New Year’s eve and – at the stroke of midnight or thereabouts – set on fire to burn away the bad juju of the old year and make way for good new stuff. For maximum effect, celebrants jump over the bonfires they set and throw fireworks into them, though ideally not at the same moment.

For a woman who has been known to sleep in the gutter of Colorado Boulevard to get a good seat for the Rose Parade, irresistible, right? 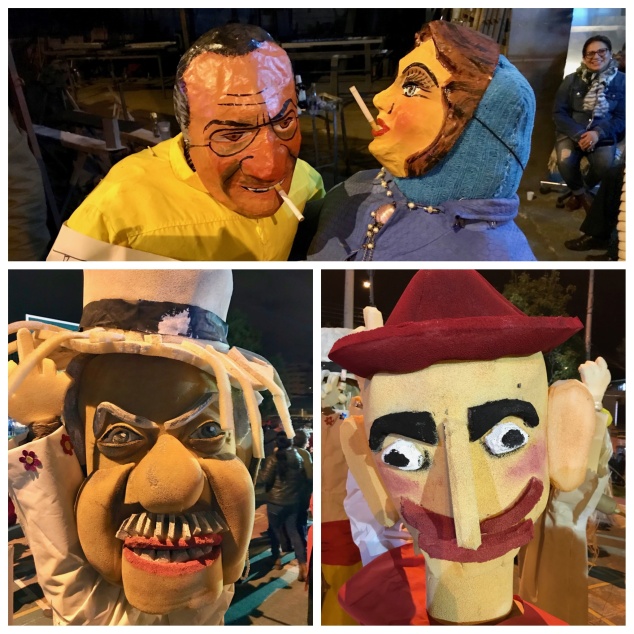 Veteran roadies that we are, we scoured the internet ahead of time for tips on when, where and how to see the traditions at their most traditional. We read about the way the celebration starts at home when generations gather for dinner and to share rituals like eating 12 grapes one at a time (one for each month) washed down with champagne or running around the block pulling a suitcase to bring travel in the year ahead. We queried locals and expats and grilled the teachers at our Spanish school so as not to miss a thing.

Crossing the Rio Tombebamba, making our way through El Vado and along the city’s biggest boulevards, we gawked at masked revelers.

We noted the range of monigotes, from simple stuffed figures (the easier for burning) . . . 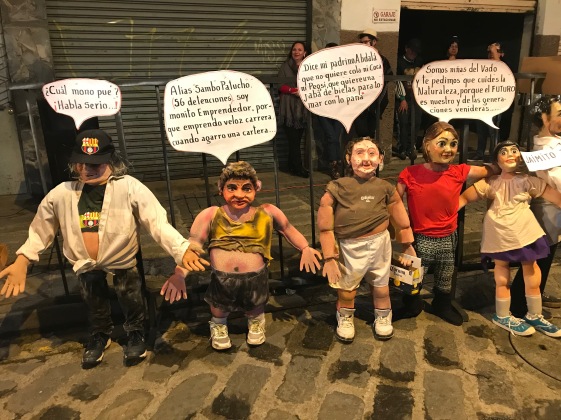 We admired the the vehicle-borne manigotes and the various ways they were attached to cars and trucks.

We joked with men in drag who play the role of viudas (“widows” of the old year) on the eve of the new year, vamping as they collect money for the city’s poor children. 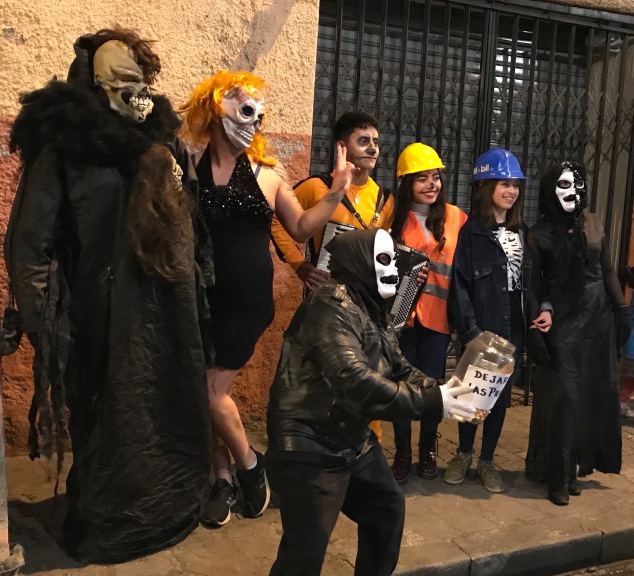 And we were startled and impressed to discover that the neighborhood displays were not all about fun and frivolity. Like the cross-dressing viudas, they were delivery vehicles for social messages. Mineral exploitation, substance addiction, discrimination against indigenous peoples. Profound purposes were cloaked in costumes and papier mache.

The skeleton above left evokes a song about why safety practices are important for miners, while the downcast man at a substance addiction tableaux asks, “Will it be that everything was my fault?” Below left, the question about the landscape ahead of the jolly biker is whether nature will all be lost to “absurd mining. The monigote youth demands that the president stop harassing  the indigenous. 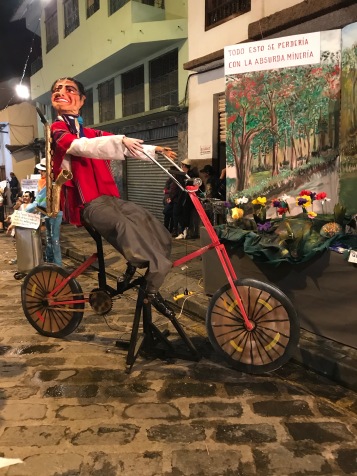 We were equally startled but dismayed to find . . . we ran out of gas before the first fires were lit. The miles of walking, gawking and ogling, interviewing and photographing, rendered us too pooped to party. For all our strategizing and positioning, we had fizzled out. By midnight, we were home and in bed, too exhausted to be too disappointed.

And that’s when things began to pop. We had heard about the fireworks of Cuenca’s New Year’s eve and the way every block if not family ignites rockets that turn the whole city into a 360-degree aerial show. A few moments before midnight, we were jolted from our fizzle by the booms. We ran onto our AirBnB balcony. North, south, east, west. In every direction, the sky was ablaze. What looked like burning kites floated into the heavens.

The show went on for hours, or what seemed like it (probably more like 30-45 minutes) and only when it ended did the city, and we, finally go to sleep.

On the first day of 2020, Cuencanos were still sleeping off the celebration. The city was dead, far deader than on Christmas in the States. The nearby McDonald’s was doing a land office business, perhaps because not another eatery was open.

Possibly more refreshed than our host citizens as a result of fizzling rather than sizzling, we had the streets to ourselves on New Year’s day and wandered about enjoying the architecture in a way we can’t when they are full. Not a monigote was to be seen but, here and there on the sidewalks were their remains, piles of ashes that marked a spot where one had ended its brief colorful career, taking the bad of 2019 with it. 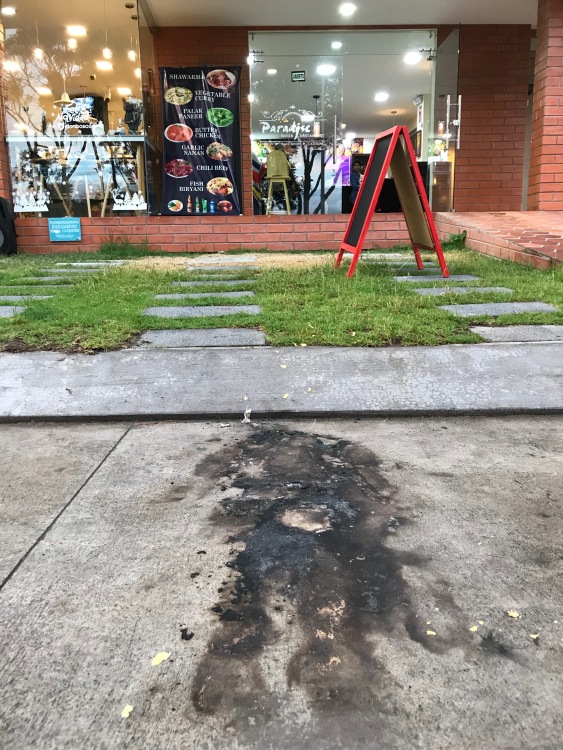 Tips from the Partout toolbox return after we have fully recovered from seeing in the new year. In the meantime, a healthy, happy and peaceful 2020 to one and all.

8 thoughts on “The New Year that Popped and Fizzled”