We all grow up with images of the rainforest. Whether we got them from Tarzan, Tintin or Rudyard Kipling, Harrison Ford going mad on the mosquito coast or dog-eared National Geographics from our childhoods, the tropical rainforest – like the great plains of Africa – is woven so deeply into literature, film and news that it seems easy to picture.

And then, if we are lucky or determined, we get there one day, and the deep jungle of the tropics turns out to be something else altogether.

At least that is what happened to Partout after we flew 40 minutes from Quito to Coca, clambered into a motorized canoe, zipped down the Napo River for nearly two hours, trudged almost a mile through bogs to a shallow creek, boarded a canoe, were paddled to and across a lake and finally arrived at our digs, an eco-lodge in a rainforest preserve deep in the Amazonian jungle of Ecuador. 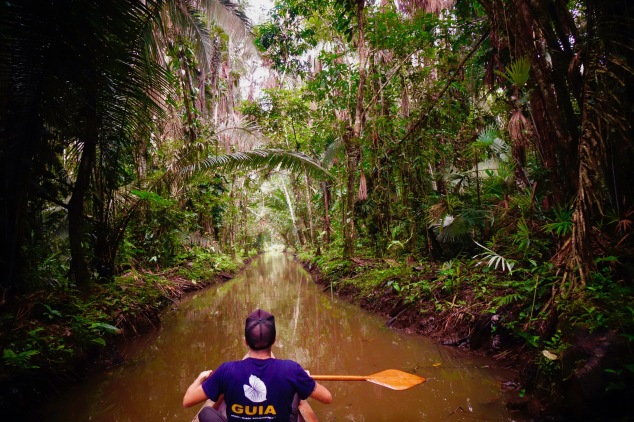 We were armed with insect repellent, sunscreen and a lifetime of images that prepared us to be swarmed by butterflies (on the light side) or consumed by piranhas (on the dark one), all while running the risk of being squeezed to death by an anaconda or snapped in two by a cayman.

As one fellow member of the merry sixsome assigned to our pair of guides marveled, “When I went to Africa, it was pretty much like I always imagined. This is nothing like I imagined!”

Despite its namesake rain, the rainforest turned out to be surprisingly free of mosquitos, and sunscreen was never needed on the jungle floor, where light rarely penetrates. In our imaginations, the Amazon was full of peril – man-eating fish, lethal snakes, frogs that could kill us on contact. In reality, our guides told us, caymans mostly just lay in the mud with their big mouths open, waiting for a fish to swim in. As for swarms, the only ones that materialized were ants (army and angry leaf cutters).

In the end, the Amazon jungle felt much more benign to us humans than the African savannah. On safari in Africa, idiots who step out of their touring cars can and do become breakfast up the food chain. In the deep jungle of Ecuador, humans are pretty much at the top of the chain; it is the small things that live in constant danger.

In fact, perhaps the greatest surprise of the deep jungle was that wildlife is mostly small, even microscopic, and seldom dense in numbers. “What is rare is common and what is common is rare” is how our naturalist guide put it. The rainforest might be full of tarantulas but, in four nights, we saw just one. At the same time, Ecuador’s basin is home to more than 600 bird species, yet we could trek an hour or more through the tangle without spotting a single feather.

It turns out lush is not the same as fertile. The rainforest is extravagantly, wildly lush.  The vegetation can so dense it might as well be pitch dark for all the likelihood we could have found our way out. There is good reason the history of South American exploration includes a long trail of adventurer footprints that went into the deep and never emerged.

Unguided, this would have been the end of us

But lush does not necessarily nurture. The soil is thin, the predators many and the competition for survival ferocious, fostering mind-boggling adaptations. Trees grow thorns and “walk,” changing ground over time, to protect themselves. Birds build nests around wasp nests to recruit armed guards for their young, termites build fake nests to fake out predators, cicadas lay eggs in what looks like spit to make the offspring look unappetizing.

There is no orchid-blossom season, our naturalist told us, because no orchid wants to bloom when all the others are blooming; doing so would just reduce the chance of attracting a pollinator. One wily orchid produces blossoms that look so much like bees that bees have been known try to mate them. In search of nutrients, trees grow surface roots that snake so far from their trunks we could not see the ends of them. 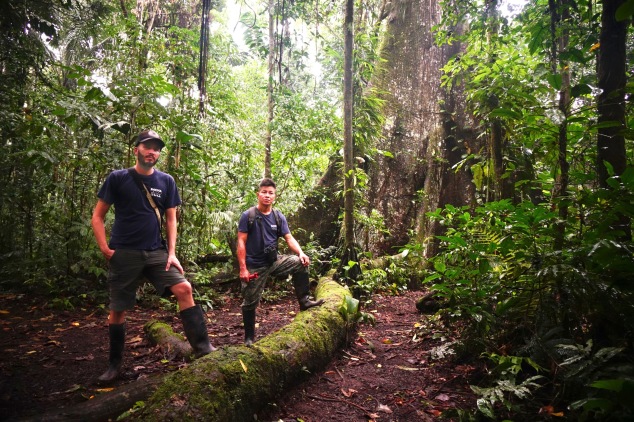 That’s a tree root our intrepid guides are standing beside

On the African savannah, it is wildlife that is elephantine – big game, finite in number even when abundant and all the varieties reasonably recognizable; plant life is relatively sparse. In the Amazonian rainforest, it is the trees, plants and mushrooms that rule, along with the insects that live off them. Kapok trees may tower like redwoods and strangler vines do hug trees to death, but bigger is not necessarily better in the battle for resources.

Ultimately, the jungle is a Lilliputian cosmos teeming with finger-sized life so infinite in variety that new species are still being identified every day. Without the hawk eyes of our guides, we would have missed or mistaken just about every wild thing we passed. We sure would not have recognized the cordyseps that thrives by a zombie alchemy in which it invades the body of its prey and transforms it into mold.

In the end, the rainforest turned out to be a sensory feast where vision took the back seat to sensation and sound. Bird calls, of course, but also the 6 pm cicada whose chirp as sunset approaches is the time clock of jungle life, howler monkeys with cries like motors, frogs that bark, rainfall as loud as thunder. And, often, gliding through ancient creeks in a dawn fog, utter and complete silence. 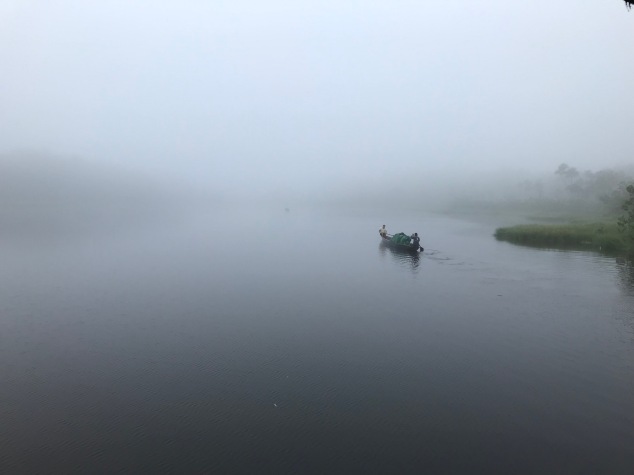 As for Tarzan. . . . That swinging-on-the-vine thing? More Hollywood. A native might shimmy up one to get bearings if lost in the forest, we were told, but only if there was no better option. A typical vine might not bear the weight of a child, much less the archetypal ape man.

FROM THE PARTOUT TOOLBOX

The childhood phrase “ants in the pants” took on new meaning when Louis did not watch where he was stepping our last day in the jungle and parked himself on a leaf cutter anthill. Within seconds, ants were up his pants and in them, in his boots, under his shirt and on his neck. Being able to strip quickly in public while hopping from foot to foot turns out to be a key jungle survival skill.

TOP TIP:
Never allow yourself to laugh so hard you miss the photo opp that may never come again.

Home sweet home after a hard day in the deep jungle

9 thoughts on “So Much for Tarzan”