14 responses to “Cape Town: Where Water Is Gold” 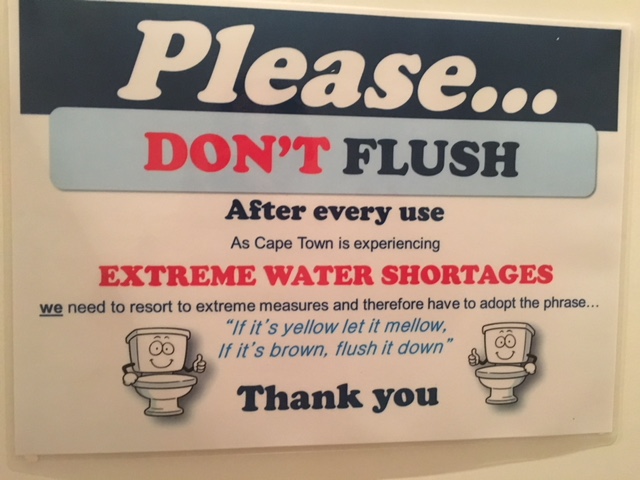 We’ve been hearing that “water is the new oil” for at least a decade, but the people of Cape Town, South Africa — where we are wrapping up our five months partout — are living the reality, and we are living it with them.

Primarily as a result of a three-year drought, this city of nearly 4 million is in danger of running out of water. “Day Zero” is what they call the date when the taps will be turned off to all but hospitals, schools and a few other vital users, and residents will start getting their water one bucketful at a time from 200 distribution points around the city.

When we decided to make Cape Town our EU visa reprieve, Day Zero was set for April. Because of effective water conservation by residents, water diversion by inland farmers and (some say) immediate intervention by the nation’s new president, the suspension of piped water currently is projected for July.

In the meantime, residents are under orders to use no more than 13.2 gallons per person per day (about six toilet flushes or less) or face fines. It is unclear to us how people monitor their usage or how the limit is enforced.

Our first AirBnB host told us that, when the magnitude of the shortage became apparent, AirBnB operators proposed en masse to stop taking reservations. “No, no!” was the official response. “Let them come.” Whether this was for PR or economic reasons is also unclear, but come the visitors still do.

In Cape Town International Airport, drought and conservation messages are now just about the first messages passengers see after landing. Hand sanitizer dispensers have mostly replaced running water in the airport restrooms, as if to underscore the point.

What does an epic water conservation campaign look like in a modern, international city?

14 thoughts on “Cape Town: Where Water Is Gold”