6 responses to “Off to the Camel Races”

Our visit to Dubai was a little like the tale of the camel’s nose.

“Oh, master,” bleats the camel from outside the tent where the master prepares for the night. “It is so cold. Can I only put my nose under the flap of your tent to keep it warm?”

A kindly soul, the master agrees, and in comes the nose.

“Oh, master,” whines the camel a bit later. “My ears are so cold. Can I not put my head inside your tent?” Again, the master agrees.

You know how it ends: Eventually, the wily camel insinuates his whole body into the tent, and the master is left out in the cold.

This is an exceptionally appropriate analogy for how we ended up staying in Dubai for four nights and watching camels race.

First, we were just going to fly in from Amsterdam, stay overnight at the airport without ever going to the city, and fly to Oman the next day. Then people started saying, Oh, travelers, you really should at least stick your noses into the city, and we decided to stay a second night.

After that, we started looking at what there was to do, and we decided we should stay three nights, max. And then Doris learned about the camel spectacle at 7 am and 2 pm every Friday (requiring still another night), and we were off to the races.

We did not walk a mile for a camel (you knew that was coming, right?), but we did Uber about 40 km into the desert from Dubai, pass the Dubai Camel Hospital and then walk maybe half a kilometer to get to the grandstand at the Dubai Camel Racing Club.

Camel racing on the Arabian peninsula, as you can imagine, is probably as old as the men and camels who have shared it. If you have a camel (and, apparently, every self-respecting family does), and camels can run up to 40km per hour, what could be more natural than racing them?

CNN very conveniently reported just a month ago that camel racing is currently enjoying a resurgence in the Emirates. It’s hard to say just how much of a resurgence based upon our afternoon at the races, where there might have been 100 people at the track, half looking suspiciously like tourists and expats. But prize purses reportedly go as high as $2 million and, in neighboring Oman, Beduin families that raise winning camels are routinely rewarded with brand new $75,000 Land Cruisers, producing Beduin villages brimming with Land Cruisers as well as camels.

And that camel at the top of the blog? Probably wearing the fashionable nose guard to keep him from eating anything but the best hand-plucked dates and other performance-enhancing delicacies. Maybe honey. The CNN story said some trainers buy honey for their camels at a cost of about $3,250 per kilogram.

In Dubai, there are two races at the track every Friday in season (the cool months), and they were another Ca vaut le detour in Partout talk. Especially since, like so little in Dubai, they were entirely free to attend.

The similarities between camel and horse racing were the inevitable ones: starting gate, finish line, jockeys in racing colors, trainers and stable hands milling about, and an announcer whose Arabic was clearly saying, And now they are in the home stretch. It’s Humpy in the lead with Chewy a length behind. And now it’s Humpy by a half-length. It’s Humpy by a nose. Now it’s Chewy by a nose. And it’s ….” Chewy by a full length.

The differences from horse raising were pretty different.

The jockeys were not human. Adult riders were replaced by child riders years ago because a heavy adult was a handicap but, in a burst of humanity toward the camels, the UAE banned child riders in 2002 for 4-kilogram robots, who wear the racing colors.

The robots are controlled by human camel drivers who ride alongside the course in 4x4s shouting commands into walkie-talkies and operating small automatic whips by remote control. (Like Dave Barry, we are not making this up. We were also in no position to photograph it.)

Camels leave the starting gate in packs of five or six like these guys.

They burst out with thoroughbred eagerness. 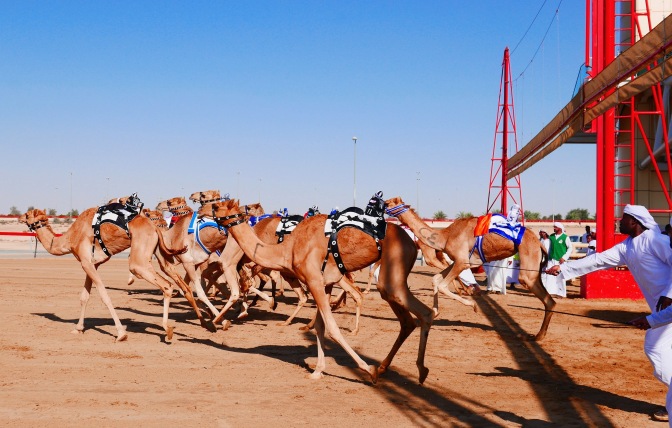 The course is so long (up to five miles) and goes so far into the desert that you watch most of the race on Jumbotron-like TV screens. The track actually starts the next race before the current one has ended because there is no chance of overtaking.

Cameras like the one below capture the action, mostly from 4x4s that race alongside the camels and their robots.

Once across the finish line, the camels keep moving pretty fast until a trainer catches them, a scene that is like a race bonus.

If there is betting at the track, we didn’t see it. Every time we approached the clubhouse, we were waved away, barely catching a glimpse inside. There was definitely no beer being downed in the sunshine, and the only women among the spectators were non-locals. There were also no food vendors. Woe to us for arriving with expectations of having lunch.

But, like the hockey game in Prague, how could we resist? And after Dubai itself, the glimpse of ancient Arabia was more than welcome.

(Update on the great visa crisis: Not looking good, but we have the very best working on the case.)

In the rear-view window:

6 thoughts on “Off to the Camel Races”