15 responses to “Christmas Shopping in Paris”

Paris did not get the memo about toning down the Christmas ho-ho-ho.

In the grand boulevards and the winding side streets, from legendary department stores to humble street vendors, it’s as if every North Pole image has been packaged up and exported to Paris for the month. In Printemps alone, there are 162 Christmas trees (two of them more than 30 feet tall) decked with 37,114 ornaments, 23,628 flowers, 6,342 birds and 900 electric garlands. It’s a wonder there is anything left for the rest of the world.

Joyeux Noël – the equivalent of “Merry Christmas” is seen and heard everywhere. There are occasional “Happy holidays,” but the phrase is almost invariably spoken by shopkeepers or painted on shop windows, not used in ordinary speech. What is not heard anywhere is Grandma Got Run Over by a Reindeer, which is itself almost sufficient reason to spend Christmas in Paris.

But it’s not just the abundance of red, green, white snow, mistletoe, lights and all the rest that make for the Christmas eye candy here. It is the elan and detail of the joyeux noël decorations at every level. It’s not surprising a high-end retailer like Yves Rocher would decks its walls elaborately.

But consider our neighborhood fruit stand, where miniature Christmas presents nestle in the clementines, Christmas bells dangle among the mangoes, and Santas Claus hang out with the grapes.

And then there are les grands magasins – the great department stores that are the grandes dames of Christmas ornamentation.

Paris is where the department store was born in the 1800s. There is even a “Grands Magasins” Metro stop for the great stores that Zola wrote a novel about almost 150 years ago. Manhattan may have its Bergdorf Goodman and Saks on Fifth Avenue, but Paris has bumper-to-bumper designers on the Champs Élysées, Printemps and Galleries Lafayette on Boulevard Haussmann, the BHV on the right bank of the Seine, Bon Marché on the left. At Christmas, their windows dance with a lot more than sugar plums.

The best of the windows are not just visual delights but narratives – window-by-window stories acted out by automated marionettes for children little and big. Our favorites are the 11 windows at Printemps, where the theme this year is … travel! 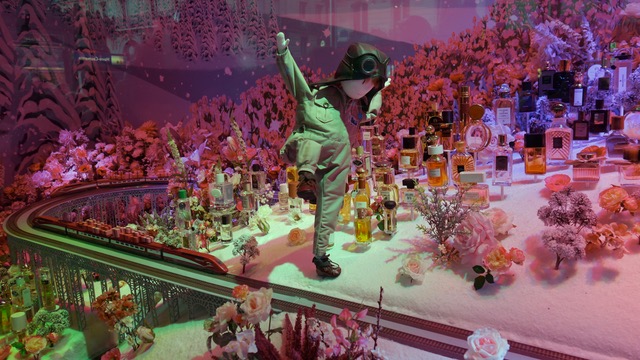 The intrepid explorer tiptoes among perfume bottles as a train chugs underfoot….

The story is that two adventurous children leave home on a search for the greatest presents in the world. As depicted by 70 animated marionettes, they ride trains, planes, boats and sleds in order to reach Printemps in the middle of the night.

When they arrive at last, they find the greatest presents in the world, all ready to be purchased inside (and delivered to buyers’ homes free with a minimum purchase of 600€).

To make it easier for the big children looking at the windows to race inside instantly for those 3495€ Jimmy Choo crystal shoes, many of the gift items are identified, with their prices, in discrete window price tags.

But window shopping itself is free and festive. For little children, there are wee steps to knee-high platforms that bring them nose-to-nose with the displays.

Meanwhile, bigger children fight their way to a view through the crowd.

Though distance from family has taken us mostly out of the Christmas shopping rigors this year, that doesn’t mean we are sitting out the shopping season altogether. We can shop for oysters, for example. Paris Insider Guide says oysters are to the French at Christmas what turkey is to Americans. This sounds like a stretch (it would be hard to stuff an oyster), but there is no question that buying oysters in Paris is quite a different matter than buying them anywhere else Doris has been. First, they are everywhere: in the markets and on the sidewalks, in front of bakeries, supermarkets, corner grocers. Filling baskets, bins and plastic tubs. Elegant and inelegant.

Show an interest in the crusty little crustaceans, and the vendor is liable to pop one open and feed it to you on the spot. That’s what Louis is doing at the top of the blog. Free oyster tasters?! In the great tradition of “When in Rome,” we are sampling and eating as many as we can. Oysters for both lunch and dinner? Pourquoi non?

This being France, the food opportunities do not stop with the oysters. For four days over the weekend, more than 90 producers of chocolate, wine, foie gras, caviar and other regional delicacies exhibited and handed out samples of their edibles at Noël Gourmand, which literally translates into something involving Christmas gluttony but doesn’t come off that way in the French. Sandwiches of pig nose, chestnut jam, wines bottled in releases of no more than 1,500 bottles, macaroons prepared with the same recipe used for Catherine de Medici’s wedding in 1533. Gluttony or discriminating taste? We Christmas shopped a little for ourselves without considering the question too deeply.

For the most part, though, we are happy to sit out the shopping. Aside from the crowds and distance from loved ones, with prices like this, who could blame us?

15 thoughts on “Christmas Shopping in Paris”