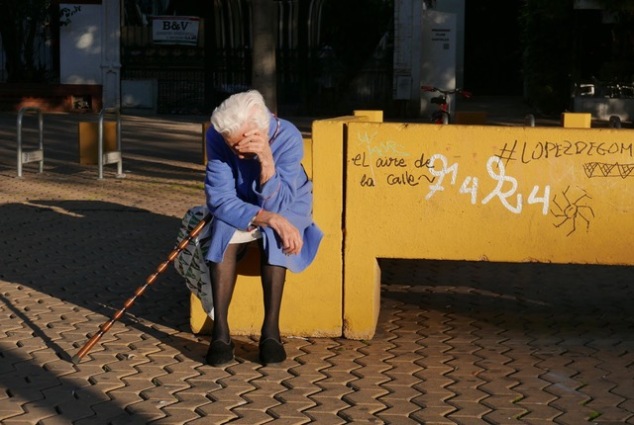 It is hard to learn much about the character of a nationality as a tourist. The locals tend to be putting their best (or, occasionally, their worst) foot forward, and the real life of a country goes on elsewhere than in hotel lobbies and on-and-off tour buses. T-shirt messages and souvenirs often play to stereotypes while real life mostly unfolds off-stage, unseen and unknown.

What’s more, appearances can deceive or, more benignly, be no more than appearances. The posture of the woman in the photo at the top of the post suggests dejection and defeat. Spain suffered those mightily during the financial downturn of 2008. Are people in Spain (or Andalucia or, more specifically, Seville) still suffering greatly? Or is this merely one lone woman lost in thought?

At the same time, impeccably turned-out women and men – especially older ones – are a common sight in Seville. Does this mean the Spanish are thriving now, or especially stylish, or just that men of a certain age are inclined toward rainbow suits? 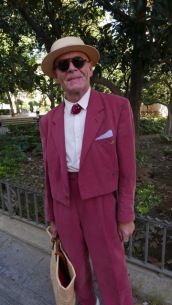 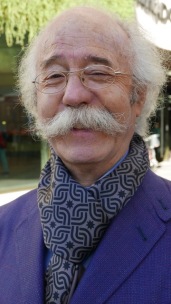 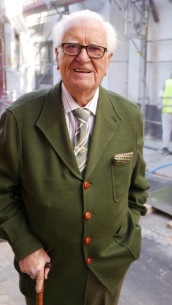 And then there is Spain and religion. Wandering the streets on Saturday night, we stumbled into horde of Sevillanos jammed into the plaza outside the baroque L’Eglisia del Salvador (Church of the Savior). People of every age and possible situation had  crowded into the square, all eyes trained on the open double doors, all obviously anticipating … well, what? Doris whipped out her trusty rusty Spanish to find out.

Una virgen was the answer. A virgin, soon to emerge from the church. Nothing special, the woman added helpfully. Hay muchas virgenes in Sevilla – there are many virgins in Seville. This happens all the time.

Within minutes, a brass band under the church portico struck up and began a solemn march down the steps and into the crowd. 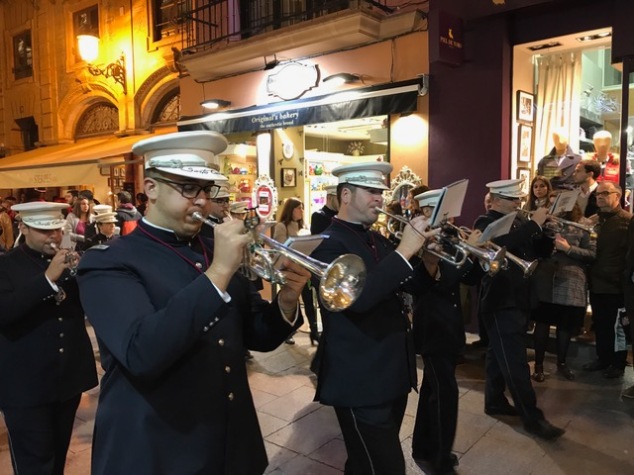 Next through the great wooden doors came a thurifer (new word of the week) swinging a thurible and trailing clouds of incense, followed by a clutch of richly dressed clergy.

That’s the thurifer with his thurible leading float through the streets.

Finally, the virgin herself swung into view, a gilt icon reigning from atop a dazzling two-ton platform born on the shoulders of costaleros, costumed men concealed by a red velvet skirt. The crowd pressed toward the float – all the strutting teenagers, the mothers and fathers steering baby strollers, the limping pensioners. A great show of Spain’s enduring faith and religiosity.

We don’t know which of Seville’s virgins this was. There are many.

To get beyond appearances, we took a class on Spanish culture at the language school where Louis is studying Spanish and Doris is studying French (another story). The teacher said stereotypes are imposed from outside, not assumed from within, and tend to be stronger outside a country than inside.

She tested the group on their ability to divine the true from the false in 32 generalizations about Spain and Spanish people, statements like –

The answers: False, laughably false, very true, depends on the occasion and … false.

The Spanish are not particularly religious, she said. Like elsewhere throughout Europe, religion has faded as a force of life. The churches don’t have congregations any more, mass is not said in many of them. What appears religious to outsiders is, in reality, “anthropology” – a love of custom, tradition and fiestas.

Weighing in at about 4,000 pounds, los pasos (floats) only appear to be floating. The truth is not quite hidden beneath the velvet drape.

Floats like the one we saw are the centerpieces of one of the city’s oldest and dearest customs/ traditions/ fiestas, Semana Santa. During the week before Easter for the last 450-plus years, nearly 70 church brotherhoods have carried their pasos through the streets for as long as eight hours at a stretch. Some of the floats (typically gold if depicting Jesus, silver for Mary) are so ancient and elaborate they are regarded as priceless works of art.

Somehow, we had stumbled into a display in miniature of this particular anthropology. We even joined in eventually, trailing the float as it stopped and started through the streets, so close we could see the white sneakers of the costeleros beneath the red skirt and hear the knock as the overseer dropped the heavy hammer fixed to the prow of the float that lets the bearers know it is time to move on.

Why one of the brotherhoods and its silver virgin and brass band were on the loose on a Saturday night in November, it will take a Sevillano we haven’t asked to tell us. What we know for now is that affirmed the stereotype that some of travel’s most memorable experiences are the ones that weren’t on the schedule.

Seville in the rear-view mirror:

Coming soon: Our own tales of the Alhambra

True or false? The Spanish don’t much like hanging out in bars.