Remember the scene from Back to the Future where Marty McFly discovers he has been accidentally time-traveled back to 1955?

In Vilcabamba, Ecuador, we joined him.

We came to the 4,000-soul town so far south it is almost in Peru because there was this really enticing AirBnB cabin with great reviews, and it looked like a great place to do nothing for a week. Which it was.

“Nothing” includes watching the scenery change, which it did about every 10 minutes

After one day of absolutely nothing, we were ready for something, so we trekked downhill an hour and a half from the cabin to the town itself.

Which is where Marty McFly comes in. Picture this. . . .

Location: Classic South-America pueblo. Inevitable Spanish-style church opening onto  inevitable main square. Two-story buildings with balconies hanging over square, one-story adobes slouching down cobbled or dirt streets beyond. Except for the overhead wires and 4WD taxis, probably not much changed for a century.

Back story: “Oh, Vilcabamba: where mountains soar alluringly above town, where the balmy air is synonymous with longevity (it shot to fame for its high number of centenarians after Reader’s Digest did stories on them in 1955), where those who encounter it simply get waylaid – sometimes for months, sometimes years. . . (Lonely Planet).

Casting: Superannuated hippies, some weathered to leather. Birkenstocks and beards, long beards. Dreadlocks and tie dye. Billowing harem pants, macrame purses. Young hippies come to grow old with the old, some with their own young or, at least, their dogs. Throwbacks to San Francisco in the’60s, Asia in the ’70s, Mexico even today.  Yoga galore, reiki, heavenly massages at heavenly prices.

And gringos. Lots and lots of gringos. 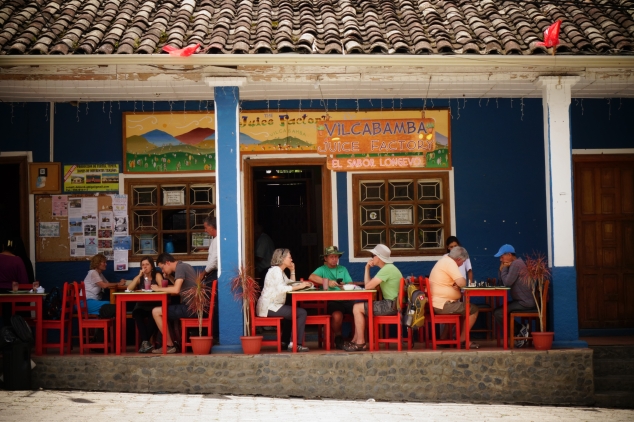 Every watering hole has its regulars. After two days, we could recognize them all

Hard to say whether Louis is happier about finally finding a screening of the classic Soy Cuba or because he see a movie out-of-doors in a T-shirt at night in winter.

Gringos from the US and Canada, from Germany and Poland, from just about everywhere except Spain (the Spanish seem to have stopped coming to the New World) and China (so far). Gringos traveling on wheels that have rolled from afar.

Dutch gringos shipped in their own camper

There once were even more gringos, we were told, not so long ago. In 2015, an asteroid was supposed to devastate the globe in September. Gringos reportedly flocked into Vilcabamba to dig bunkers to survive the impact and then flocked back out when they were not impacted. Even so, estimates are that about 30% of the village’s population is still foreign, drawn by the spectacular setting, mild climate, drinkable water, low cost of living, universal health care and, maybe, beer and flat whites.

Every one of them has a story. The German who lives outside Vilcabamba but comes to town to go to a sweat lodge. The Londoner who came to South America for six months in 2010 and is still here, building houses for gringos. The former world-ranked tennis player-turned-Bay-Area-hairdresser with his jazz-singing wife.

Doris getting a Bay Area touchup in salon with a view. Cut and color: $35

Some just pass through, like the Argentinian couple on an Alaska-or-Bust drive from their home country with their two-year-old son. They have already been on the road a year and a half, living off the curbside sale of drums they make along the way. Asked when they expect to reach Alaska, they just smile and shrug. “Quien sabe?”

Others stay, for years or forever, the pre-pensioners opening bars and restaurants, providing services, practicing healing arts and, sometimes, all of the above and more. We picked up one business card that promised travel arrangements (airplane, hotel, transportation, car rental), payment services (electricity, water, taxes) and Spanish/English tutoring (both languages), all from one person.

Us, we are now north of Quito for a long weekend before setting out in a canoe into the deep jungle. As always, thanks for sharing our road. 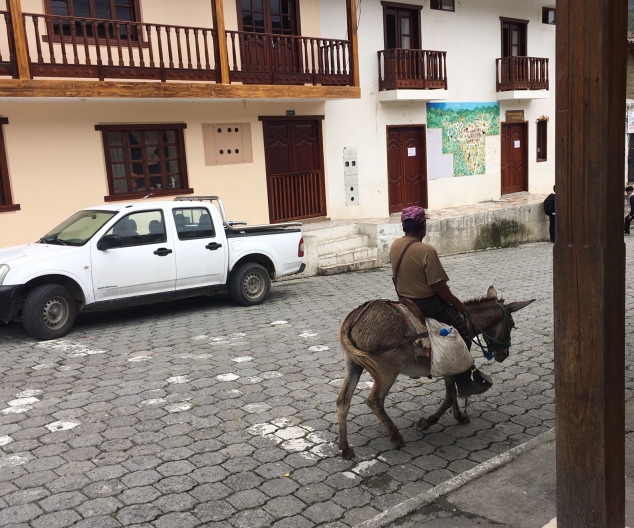 FROM THE PARTOUT TOOLBOX
Credit card mileage rewards feel like found money for us roadies. Since we would be charging purchases to credit cards anyway, getting free travel for spending money with them doubles the fun. The tricky part comes when we go to use the points to secure free tickets. More than once when we have gone online to ticket ourselves, the same ticket requires, say, 30,000 points from the first of us to go online but 45,000 points for the second. (Our points are in separate accounts to maximize sign-up bonuses.) We know it can’t be a matter of the first of us getting the last ticket available at the lower award level because it happens to us repeatedly – and because we have found away around it.

TOP TIP
This may sound like throwing salt over a shoulder to escape evil, but we now buy awards tickets sitting side by side on separate computers, logged on from separate email accounts and going through the booking process in tandem, right up to “Purchase.” Without fail, booking simultaneously instead of sequentially locks in the same award deal for us both.

COMING EVENTUALLY: Jewels of the Crown (and Others) 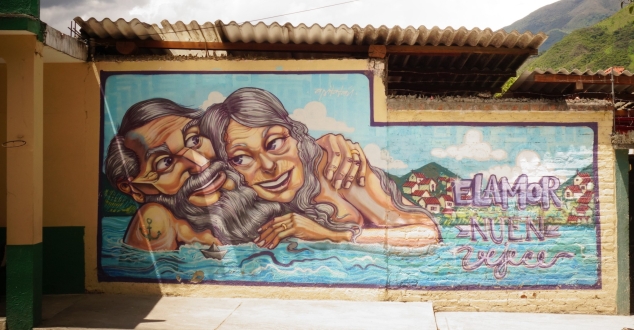 In Vilcabamba, even the murals feature aging gringos

6 thoughts on “Eureka! The Fountain of Youth!”